Salt Spring Island is the largest of the Gulf Islands and is a firm favourite amongst those looking to escape the hubbub of the city. And with good reason. It’s just a short trip from either Vancouver Island or the Lower Mainland, but once you step off the ferry, island life quickly kicks in. There’s a decidedly laid-back vibe here, with arts, crafts and food being high on the list of priorities.

Food is a particular passion on Salt Spring, especially of the homegrown, artisan variety. Cheese, coffee, salt, meat, vegetables, baked goods, wine, ale and cider – it can all be found here in abundance. The plethora of markets, roadside stalls, farm shops and independent eateries ensure you can never go far without devouring something totally delectable. All locally grown and produced, of course.

Salt Spring Island is a popular destination for those touring on two wheels. If you visit in the summer months, it won’t be long before you see a Lycra-clad cyclist lugging a pair of panniers up a hillside.

Upon telling a local that I, too, intended to cycle around the island, his eyes widened and a torrent a warnings quickly poured forth. It was too hilly, he said, and too dangerous. The roads don’t have separate cycle lanes and the drivers aren’t particularly accommodating.

Feeling a little deflated, I made my way to Salt Spring Adventure Company and made further enquiries. The staff allayed my fears, saying that while there are hills, you can always get off and push (or rent an e-bike). And yes, you do have to cycle in the hard shoulder, and yes, some of the roads are busy. However, if you are reasonably confident on a bike, and you stick to the quieter roads, you’ll be just fine. So, I rented a bike and off I went.

I opted for the northern loop, heading out of Ganges on the Upper Ganges Road, skirting St. Mary’s Lake, peddling to the northern-most tip before heading back along Sunset Drive for a pit-stop at Vesuvius Café. There was one final hill to conquer before reaching Salt Spring Wild Cider, where it was time to relax in the apple orchards while quenching my thirst.

It cannot be denied that some of the hills are real thigh-burners. And some of the roads are unpleasantly busy. But on the whole, it’s a beautiful way to spend a day. The winding country lanes take you through pastoral landscapes where vines grow and cattle lazily munch. During August the hedgerows were bursting with blackberries, and there’s plenty of quaint cafes, farm shops and roadside stalls to keep you fuelled. If it all gets too much, you can always stop in one of the freshwater lakes for a swim. 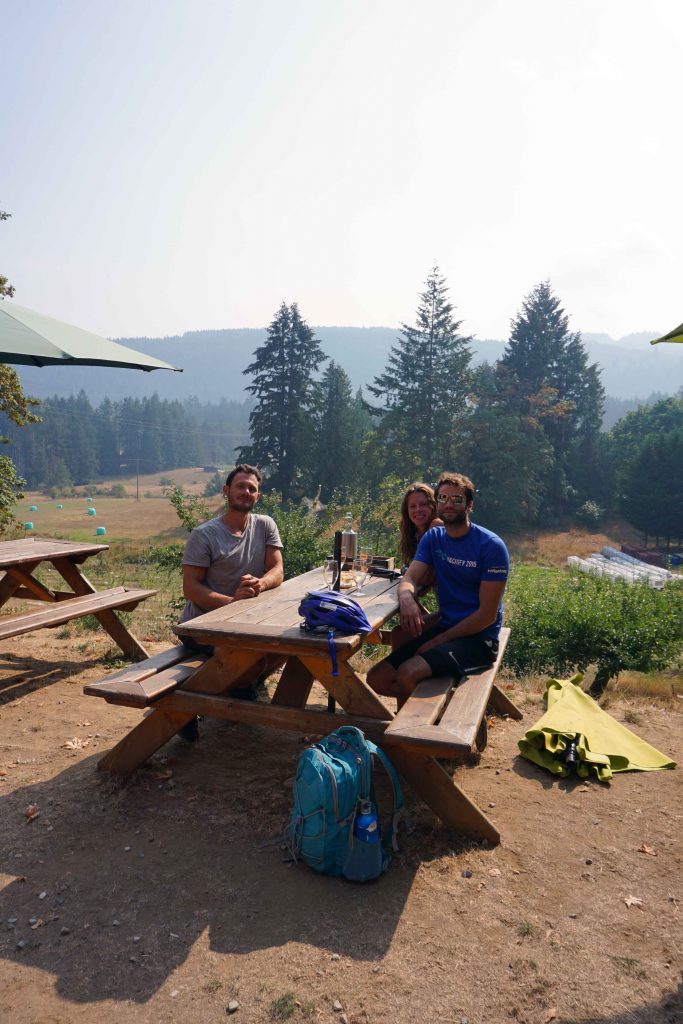 Enjoying a cider after a thigh-burning bike ride

Unless it’s blistering hot outside, sea swimming probably won’t be high on the agenda. The waters surrounding Salt Spring Island are incredibly cold. The warmest waters are up by Vesuvius, but even those are frigid.

But never fear, there is a handful of freshwater lakes around the island, perfect for a dunk. St Mary’s Lake is by far the largest, with Cusheon Lake, Stowell Lake and Weston Lake being other options. 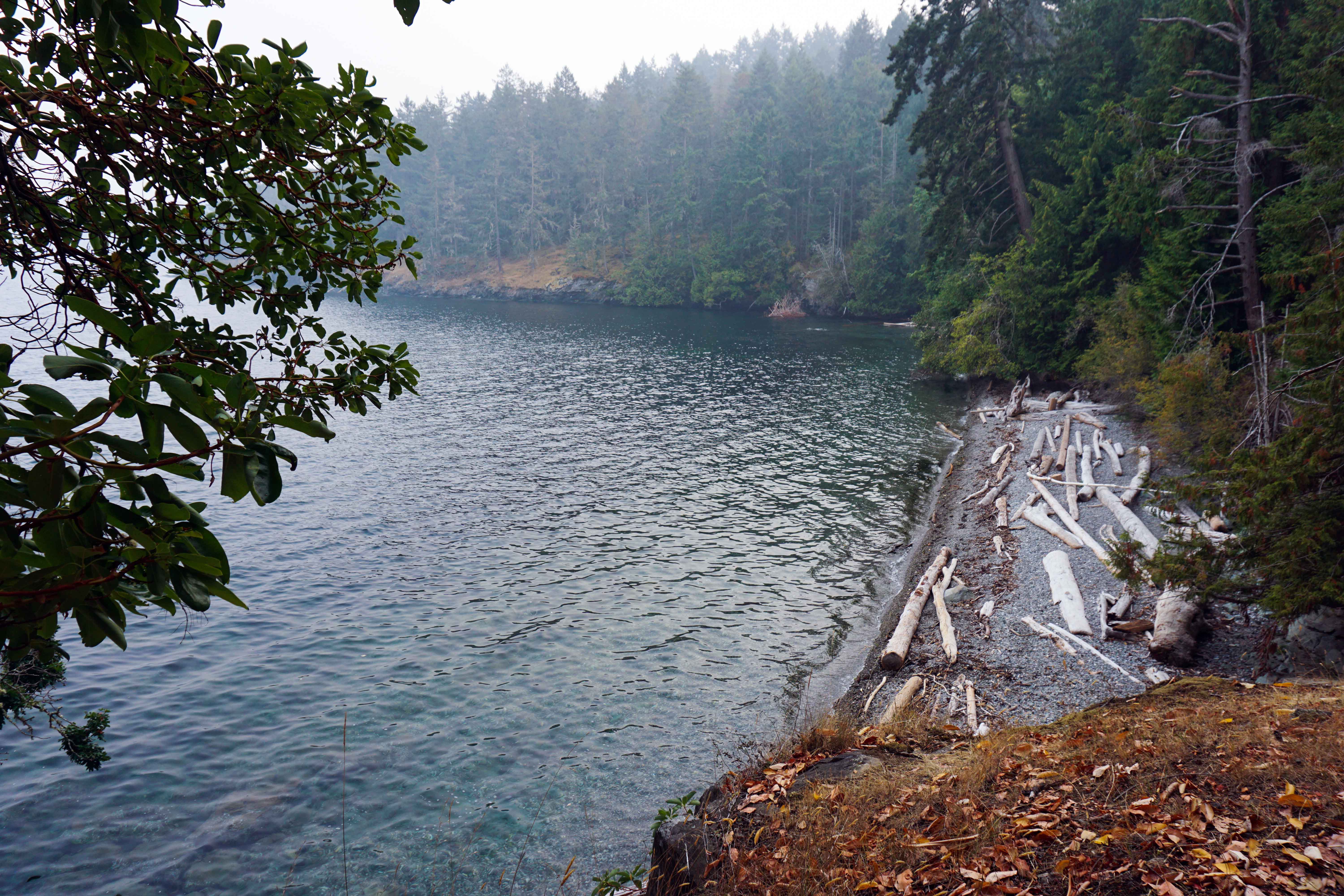 Caution – the water is cold!

Baynes Point is the highest point on Salt Spring Island. Standing at 602m, you won’t be scaling any mountains during your visit. Nevertheless, there are some great hikes to be had.

A favourite was the hike to Baynes Point from Burgoyne Bay. The steep, steady climb takes you through the heart of Mount Maxwell Provincial Park, one of the largest contiguous protected areas in the Gulf Islands. When you reach the lookout, you are rewarded with stunning views across the sea to Vancouver Island. You can actually drive to this point, but if you ask me, the rewards are greater if you arrive on two feet!

Another good hike is Mount Erskine. It’s not as long, but the walk through the forest is extremely peaceful, and the views are just as breathtaking (although the mill at Crofton, which can be seen across the water, is a bit of an eyesore!) If you have kids with you, they’ll also love the little fairy doors which are dotted throughout Mount Erskine Provincial Park. 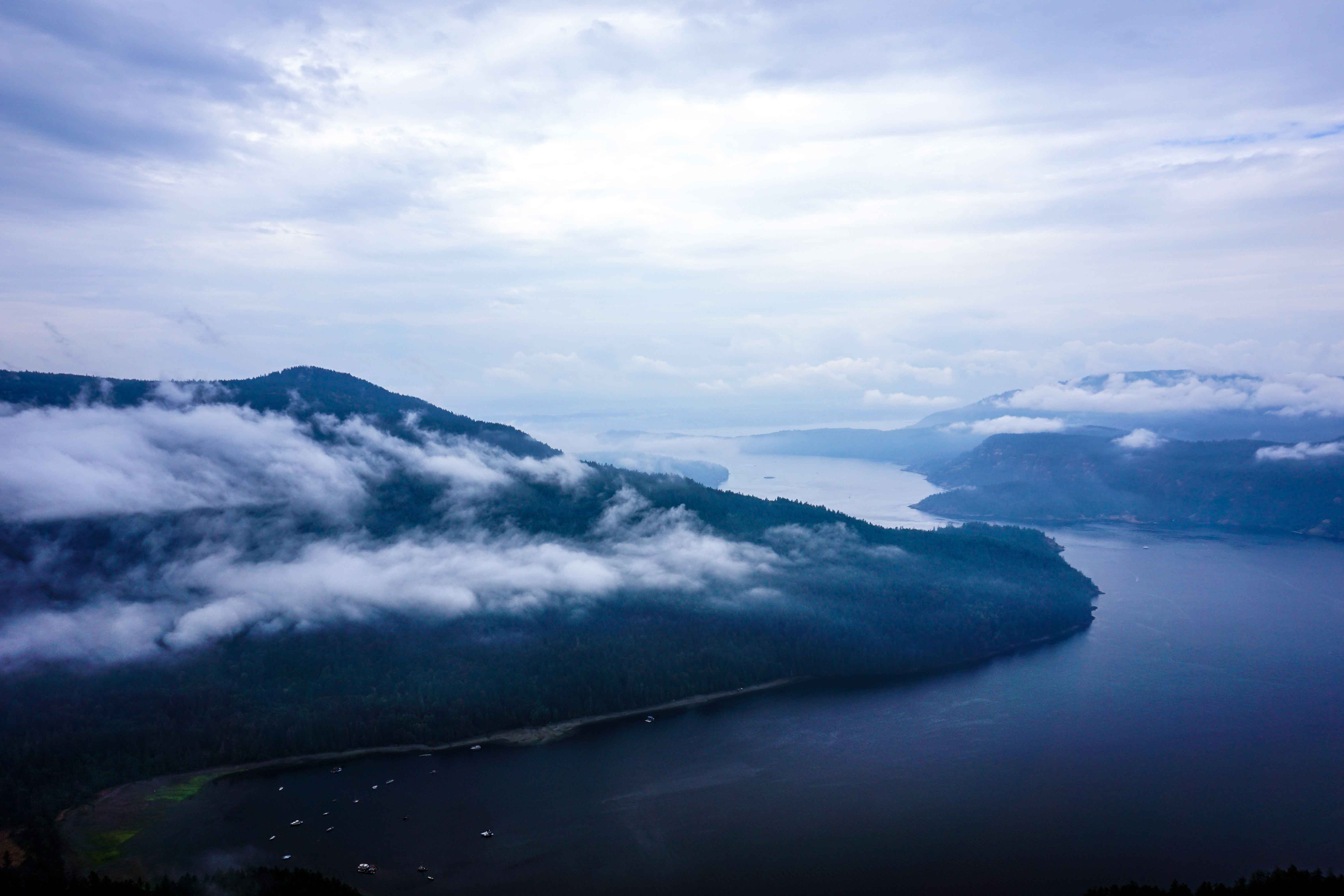 It often follows that where there’s good hiking, there’s also good trail running! Ruckle Provincial Park is particularly plentiful in that department. I was staying at the campsite, so followed the trail up to Yeo Point and back. There’s not much elevation and there are a few little beaches to stop at for a rest (and a swim, if you can brave the cold water). 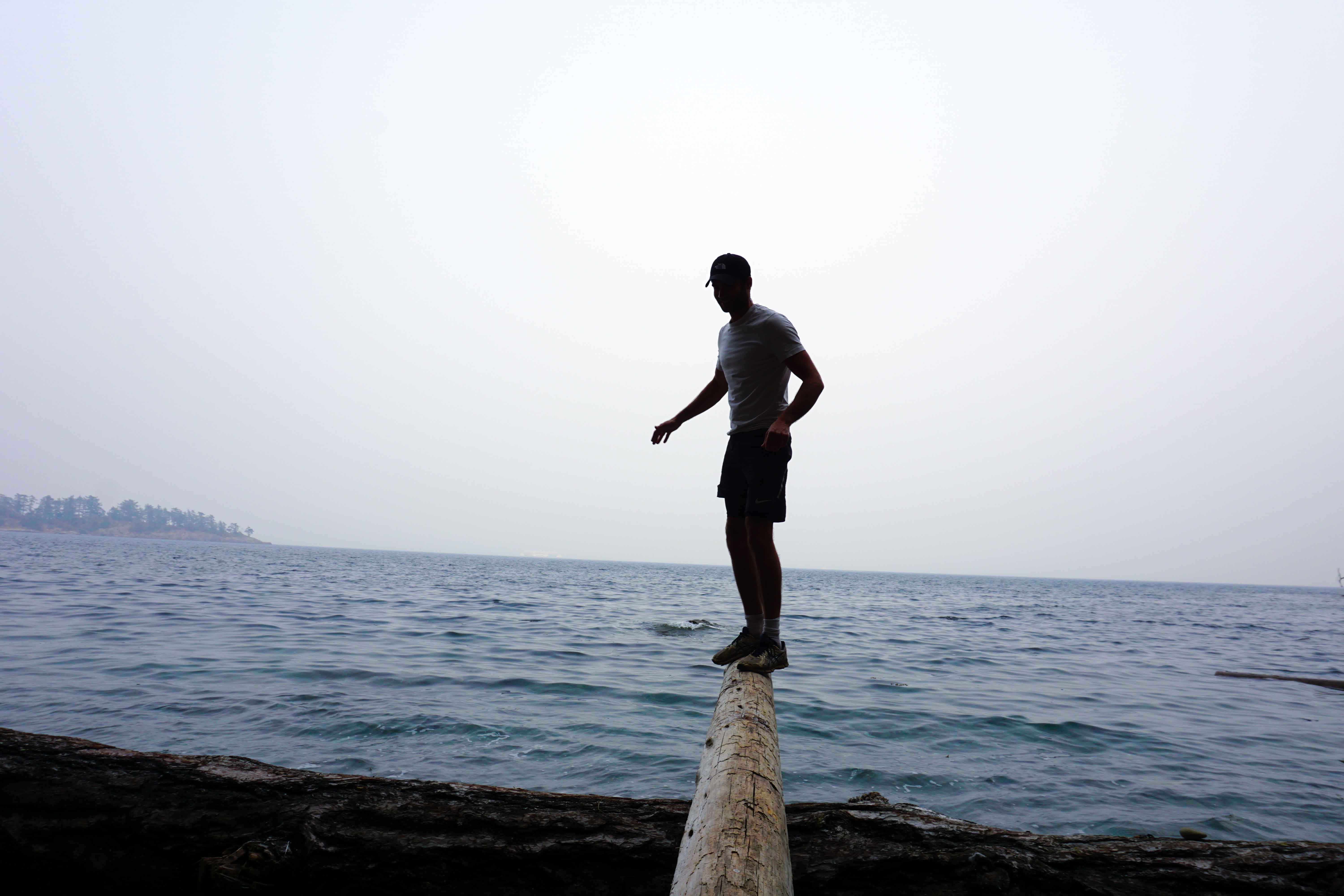 Kayaking is another popular past-time on Salt Spring Island, although you do need to be wary of the ferry traffic. Kayaks can be rented from Salt Spring Adventure Company and they can offer some top tips on destinations to hit up. Or, you can always go on a guided tour.

I decided to paddle over the Chocolate Beach on Third Sister Island, which is a short jaunt from Ganges Harbour. With clear blue waters, a white crushed shell beach and a wooden swing hanging from an arbutus tree, you’d be forgiven for thinking you’d landed on a tropical island. 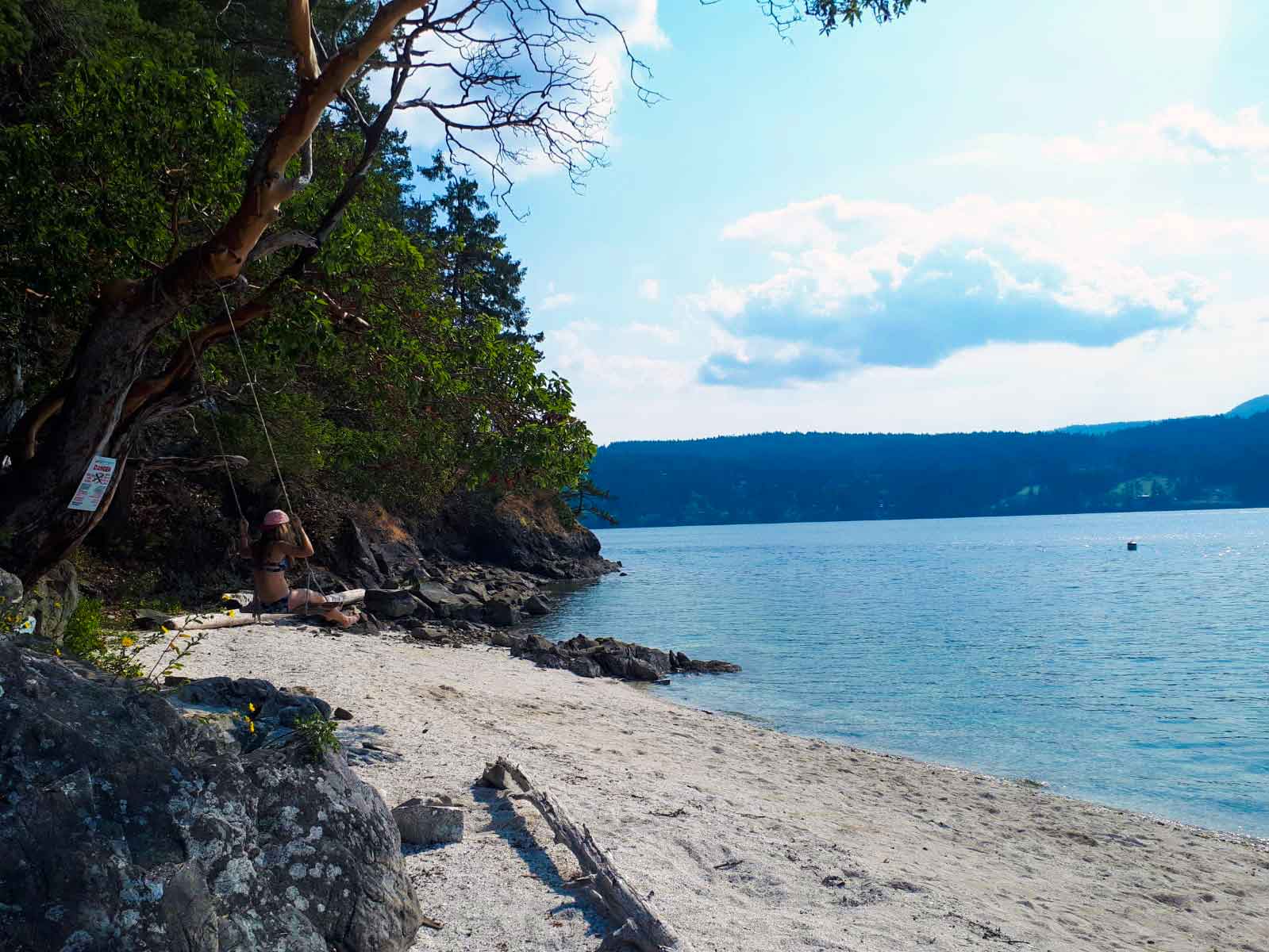