Spanning 180 kilometres, 14 backcountry huts (with another in the pipeline) and beautiful yet varied terrain, the Sunshine Coast Trail (SCT) is one heck of a hiking experience.

The history of the Sunshine Coast Trail

The idea was conceived in 1992 by two gents called Eagle Walz and Scott Glaspey. Their motivation was to save the area’s remaining old growth forests. They believed that if more people could access this section of B.C’s backcountry, the more chance there was of saving it from the talons of the logging industry.

A year later a group of volunteers known as the Powell River Parks and Wilderness Society (PRPAWS) was formed. They worked for eight years to create a hiking trail that spans the length of the northern Sunshine Coast, from Sarah Point in Desolation Sound, to Saltery Bay. The rest, they say, is history.

Nowadays the group continues to maintain the SCT, including both the trail itself and the huts. That means that any information shared here may well be out of date in years to come. But as it stands today, the SCT’s claim to fame is that it’s the longest free hut-to-hut hiking trail in North America. No fees, no reservations, and if you want, no tents necessary. Pretty good, right?

My brief encounter with the Sunshine Coast Trail

While planning a trip to the northern Sunshine Coast, I invariably stumbled upon a bounty of information about this epic hut-to-hut trail. Unfortunately, I didn’t have time to do the whole thing. After all, I was only going to be on the Sunshine Coast for five nights, and I had a lot of other activities on the agenda.

But not wanting to bypass it completely, I settled on the notion of doing an overnight hike. We only had one car between us, and a 2WD at that, so it would have to be a there-and-back hike with an easily accessible trailhead. After scouring the internet for information with little success, I contacted the good people at Tourism Powell River and asked for their recommendations.

After approximately one hour (I’m not kidding), a lovely lady called Tracey replied to my email with the following suggestions –

In the end, I plumped for option 3 – Inland Lake to Confederation Hut.

After spending a night at the Inland Lake campground, we drove our car all of 20 metres to the day-use car park, filled our water receptacles at the pump, and set off into the unknown. Actually, that’s not entirely true, as the first couple of kilometres skirt the edge of Inland Lake. Seeing as we’d done the 13km loop around the lake the previous day, we sort of knew the way.

Shortly after the totem pole, a sign pointing right directs you to Confederation Lake. It’s uphill from there. Yep, there’s no two ways about it – this section of the Sunshine Coast Trail is steep. If you’ve got an overnight pack on, and it’s 30°c outside (which is was), then it’s pretty hard work. 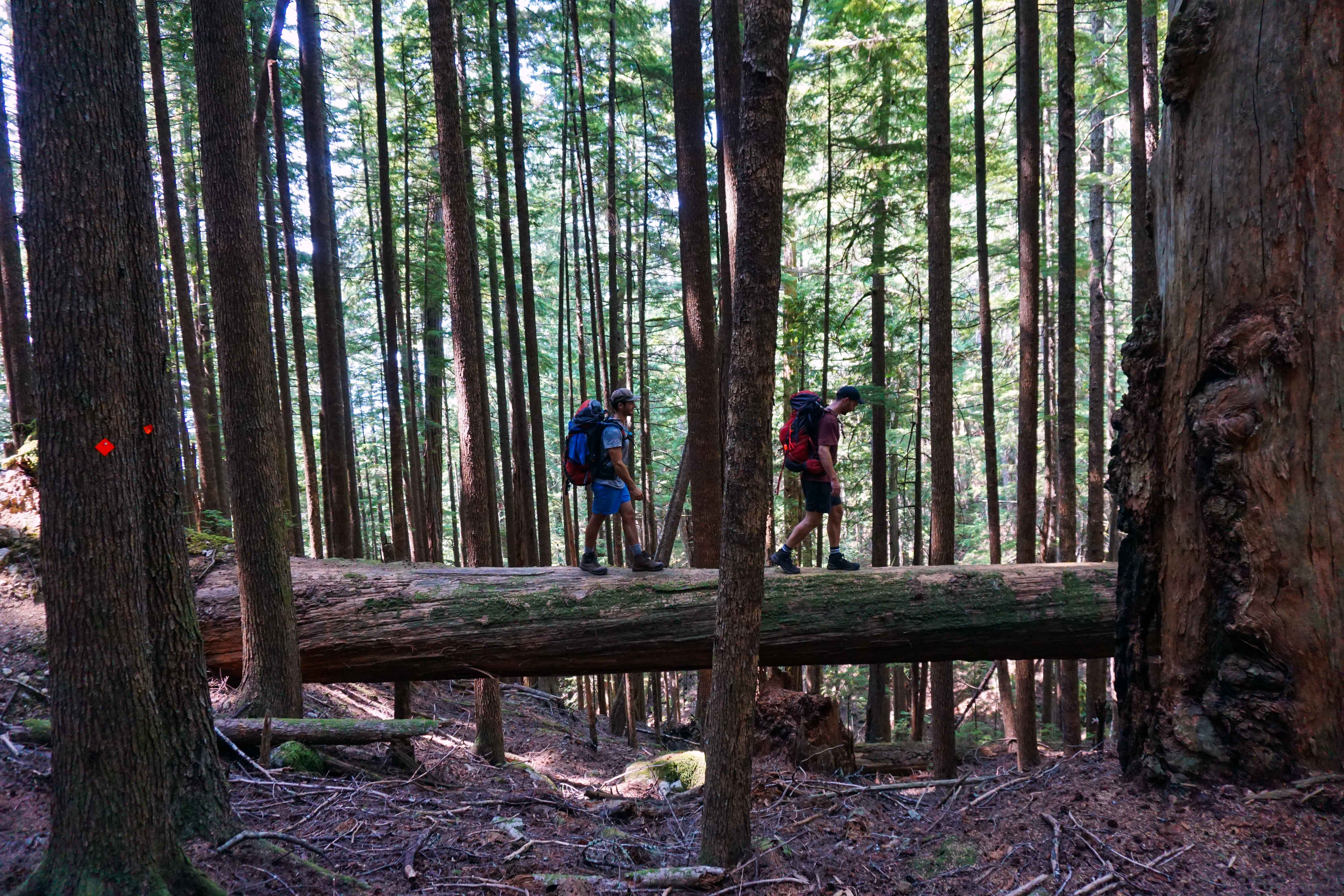 The Valley of Fatigue

Even so, the beautiful old growth forests provide a robust shelter from the sun, not to mention something awe-inspiring to look at as you heave yourself through the Valley of Fatigue – yes, that’s it’s given name! As you reach the shores of the lake, a sign informs you that it’s another agonizing 2km to the hut. From here the trail becomes more technical and begins to undulate.

At this point, with mounting anticipation and increasingly sore and sweaty bodies, we began to speculate on our chosen destination. What would the hut be like? How many other people would be there? Would the lake be nice to swim in? Wouldn’t it be good if there was a boat?

And then we arrived.

Expectations were exceeded. There was even a bloody boat. The Valley of Fatigue was forgiven.

As it turns out, there was just one other resident of Confederation Hut that night – a Slovenian called Mike. He had hiked all the way from Sarah Point and dutifully told us that Confederation Hut was the best hut he’d stayed in on the Sunshine Coast Trail to date. So nice, in fact, that he’d decided to stay an extra night.

A gorgeous wooden edifice with a green tin roof to boot, this is THE spot for anyone harbouring Swiss Family Robinson fantasies. Downstairs is equipped with a wood dining table and benches, a wood pellet burner, and a food preparation area. The sleeping quarters are upstairs in the rafters, with a few blankets and mats for anyone in need. Further sleeping spots are available underneath the hut itself. 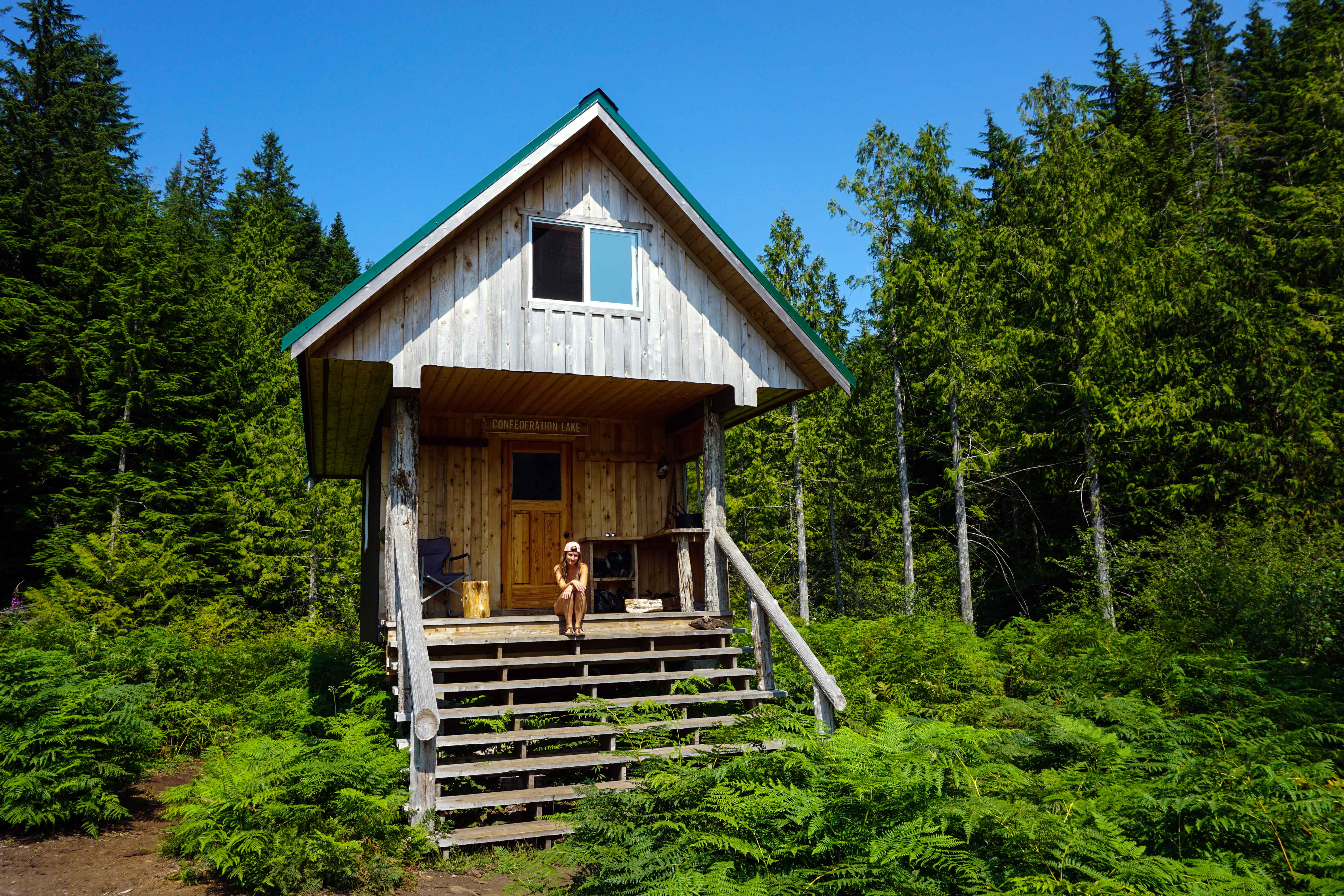 Once a thorough inspection had been completed and our spots staked out upstairs, we did what any hot-blooded human would have done – stripped off and threw ourselves in the lake. We quickly realised this was no freeze-your-wotsits off alpine lake. You could luxuriate in this all day.

Our swim was swiftly followed by a lap in the rowing boat, complete with life jackets and all. How this boat got here and by whose hand we don’t know, but at the time it felt like a gift from on high. As we sat in the middle of the lake, encased by forest, with snow-peaked mountains in the distance and the secluded cabin in the foreground, it was easy to see why our new friend Mike was reluctant to leave. 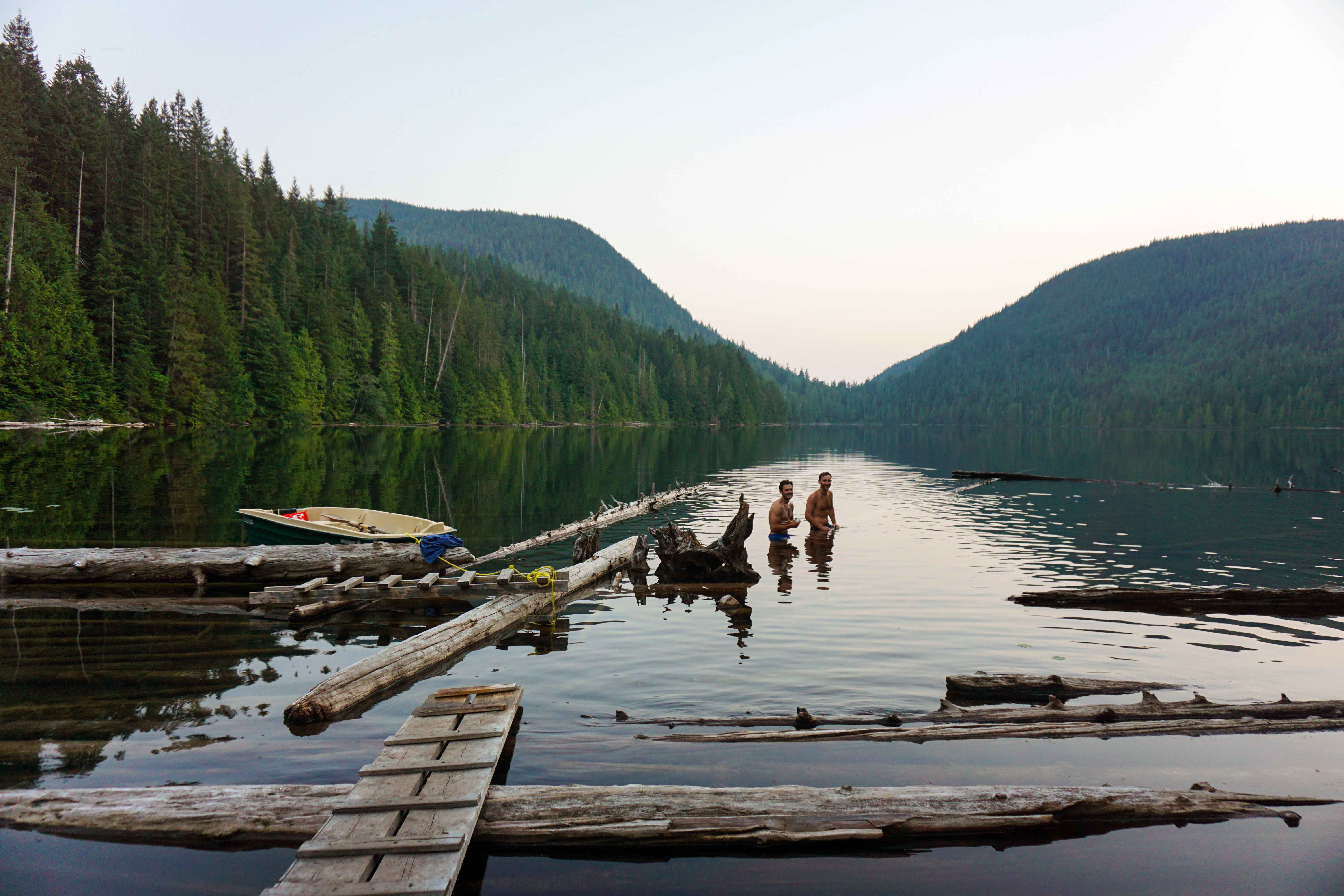 Cooling down after a hot hike

After dinner we took the short jaunt to the viewpoint at the disconcertingly named Vomit Vista. Never fear, it’s an easy walk, and there were no bodily fluids in sight. After that it was to bed, where we found the hut to be relatively cool and, thanks to the fly screens, bug free. If only my fellow companions didn’t snore, I would have had a much better night’s sleep.

The following day we forced ourselves to leave this beautiful spot, with the return journey taking about half the time of the previous day’s hike. As I scrambled down the hillside, my thoughts turned to Mike and the delights he would be experiencing as he worked his way to Tin Hat Mountain.

That’s the only problem with doing a short section of the Sunshine Coast Trail – it whets your appetite, and all of a sudden you want to take a week off work and walk the whole darn 180km.

I know that I, for one, will be back.

I know I’m a tree nerd, but these larches are th

With winter looming, there’s not long to get tho

Admiring the view or posing for our next album cov

A couple of weeks ago, when the only thing burning